abides by "National Federation" rules with the following exceptions:

2020/2021 GRAND SLAM TOURNAMENTS BASEBALL RULES (Grand Slam Sports Tournaments abides by "National Federation" rules for all age divisions with the following exceptions in the 9-U through 15-U age divisions. 16-U & 18-U age divisions will play strictly by NFHS rules)

PITCHING RULES: 8-INNINGS for 9-Under through 12-Under & 10-INNINGS for 13-15-UNDER in a regular event. 14-INNINGS for 9-U through 15-U AGE DIVISIONS IN ALL WORLD SERIES EVENTS. NO pitching limitations for 16-U & 18-U teams. THERE ARE NO LIMITATIONS as to the number of innings a pitcher can pitch in a day and still pitch the next day.

BATTING ORDER: You have 4-choices for your lineup: (1) Bat 9-straight, (2) Bat 9 with DH, (3) Bat 10/Play 9 with EH or (4) Bat the entire lineup (Continuous batting order with FREE Defensive Substitutions applies). A team must start the game with at least 9-players on defense but can finish a game with 8-players. If you do not have an eligible substitute to replace a player that is injured, ejected or cannot bat for any reason, it is an AUTOMATIC OUT when that players turn comes up in the batting order.  EXCEPTION:  If a player is injured or incapacitated where he cannot play the rest of the tournament, the lineup can be collapsed without penalty as long as a team does not fall below nine players.  The coach will inform the umpire and that players name will be removed from the roster for the balance of the event.

HEAD FIRST SLIDE: Head First slide is NOT allowed in 12-U age divisions & under when the player is wearing a helmet with a face guard; C-flap or chin strap. Players NOT wearing this type of helmet may slide head first. Head first slide is determined when a player is advancing towards a base. A team warning will be issued after the initial infraction. Any infraction thereafter will be deemed an out on the player violating this safety rule. This will be a delayed dead ball scenario.

FAKE BUNT/SWING RULE: A Fake Bunt and then Swing in age divisions 9-U through 13-U is NOT ALLOWED! Penalty for a fake bunt and then swing will result is an OUT! No contact with the ball is required for an out to be called.

HOME TEAM DETERMINATION: Home team is determined by flip of the coin at the home plate meeting. For Elimination games, the home team will be the HIGHEST SEEDED TEAM with the exception being in a Double Elimination bracket where the UNDEFEATED team in the championship game will be the home team regardless of seed. A coin toss will be done in the “IF” game in a Double Elimination bracket to determine the home team. The home team may have their choice of dugout, unless, the other team is currently occupying that dugout in a preceding game. The home team will furnish the official scorekeeper and the visiting team will furnish the scoreboard operator.  NO game will start until there is an official book and scoreboard operator.

PROTESTS: There will be a $300.00 fee payable in cash for any protest. You can ONLY Protest a RULE INTERPRETATION or PLAYER ELIGIBILITY and protest must be made before the game officially ends.

UNIFORMS: Uniforms of all team members should be of the same color and style. Duplicate jersey numbers are highly discouraged. Any uniform discrepancy must be brought up at the plate meeting prior to the start of the game. The umpire(s) will determine if a team can gain advantage based on a uniform violation. If in the umpire's judgement he/she deems the players dress to be inappropriate, the player can be removed from the game until he/she conforms with the requirements set forth.

BATS: Grand Slam will go with the following bat rule for the 2019/2020 Spring Season. Must be a baseball bat. All bats made completely of wood, that are not altered or defective are legal. BBCOR certified bats are legal unless otherwise banned by the NFHS Association. All other bats must be stamped 1.15 BPF or have a certified BESR rating imprint. Age groups 8-U through 12-U do not have a restriction on the weight/length ratio for non-wood bats. The 13-U age division for ALL GRAND SLAM EVENTS must swing either a -5 stamped 1.15 BPF or have a certified BESR rating imprint bat or -3 non wood bat that must be BBCOR certified.  This applies to ALL GRAND SLAM SANCTIONED EVENTS, regardless of where it is held, NO exceptions! 14-U through 18-u age divisions can use non-wood bats but they must be BBCOR certified and have a weight/length ratio of -3. The penalty for use of an illegal bat will be governed by NFHS rules.

CONDUCT: If any manager or head coach is thrown out of any game by the umpire, that manager WILL NOT be eligible to coach/manage in his/her team's next scheduled game. The Tournament Director and/or UIC can override this rule by letting the manager coach in his/her next game if he/they so choose. NO ALCOHOLIC BEVERAGES ALLOWED.

GAME LENGTH/OFFICIAL GAME: 8-U through 10-U = 6 innings or 1:30; 11-U & 12-U = 1:40; 13-U through 18-U = 1:45.  NO DROP DEAD TIME LIMIT! ALL State Directors will have the option of setting their OWN game time limits for each individual age division. No game will be played out after time limit or inning limit. In elimination play, games have to be played out until there is a winner! When time limit is up & home team is batting & home team is ahead, the game is over regardless of score! We will NOT complete the inning. The Final score is the score at the end of the time limit! Umpires will keep official time. NO Time Limit in Championship Games except after JUNE 1st. From August 1st to June 1st we will stick with the individual age division time limit for ALL games including the Championship game to try and avoid late finishes on a Sunday night prior to a school day on Monday.

OFFICIAL GAME: In the event of natural occurrences to include weather, field conditions, or any other situation that causes a game to be STOPPED and it can not be physically or reasonably continued, the game will be considered an official game if the teams have played 3 1/2 innings with the Home Team winning or 4 complete innings if the Home Team was losing after 3 1/2 innings. If stoppage is required after the 4th inning, the winner will be determined based on the last inning both teams completed an equal number of times at bat. For instance, if the Visitors are batting in the top of the 5th and they score 3 runs to go up 5 to 4, if the game is STOPPED, the Home Team will be declared the winner because at the bottom of the 4th, they were winning, 4 - 2. This is based on a STOPPED game that cannot be completed for various reasons to include time constraints, not a POSTPONED or DELAYED game that can be continued. If stoppage is required before a game can be considered "official", and the game cannot be continued: During pool pay, the team winning after the last complete inning (that was played) will be considered the winner, regardless of the inning. During bracket play, the winning team will be the highest seeded team in this scenario. Only Tournament and/or Site Directors can STOP a game and consider it an official game.

BASEBALLS: Each team must provide (2) two new baseballs per game. Grand Slam will provide 2-New MIZUNO baseballs for all games in the 2021 WORLD SERIES.  It is the responsibility of each team to shag foul balls during a game.

TIE BREAKERS: Games can end in a tie in EVERY GAME except ELIMINATION GAMES! In Elimination games, IF a game is tied after the time limit has expired or all regulation innings have been played, whichever comes first, the International tie-breaker will be utilized by placing the last batted out on 2nd base to start the inning with no outs. Tie Breakers for seeding purposes are as follows: 1. Head-to-Head (IF applicable), 2. Least Runs Allowed, 3. Run Differential (7-Run Max), 4. Most Runs Scored (10-Runs Max) and 5. Coin Toss. In the event of a 3 or more way tie, we will determine the Highest Seed using the aforementioned tie-breakers and after the WORST team according to these tie breakers has been eliminated and seeded, we will then revert back to the FIRST tie-breaker and go from there. This will allow us to use Head-to-Head as a tie-breaker once we get down to 2-teams. Note, Head-to-Head will ONLY be used once we are down to the FINAL two teams in the event of a 3-or more way tie.

TEAM INSURANCE:  Grand Slam Sports Tournaments encourages each team to have their own team insurance policy.

STEEL SPIKES: ALLOWED ONLY in 13-U AGE DIVISION AND ABOVE & USE OF AN ILLEGAL PLAYER or the use of an ILLEGAL PITCHER in a game will result in immediate forfeiture.

9U & 10U age divisions play on fields with 46 foot pitching rubber and 65 foot bases.

AWARDS: IN THE EVENT OF RAIN where play CANNOT be completed, Awards will be given based on TEAM SEEDING relative to either side of the bracket at the time the tournament is called off unless the game in progress at the time of postponement is an official game where 3 ½ innings have been completed!

Effective immediately, this bat (33" length Louisville Slugger Meta composite bat) should be considered a non-compliant bat. Pursuant to NFHS Baseball Rules 1-3-2d and 7-4-1a. The manufacturer has been advised that it has the right to appeal this decision. If you have any questions, please feel free to contact B. Elliot Hopkins, NFHS Baseball Rules Editor/National Interpreter at (ehopkins@nfhs.org) or the NFHS headquarters.

*State Directors reserve the right to make their roster freeze date to whatever they feel is best for their State and/or events.  This includes the State Tournaments.

3.  Pitchers limited to 6 innings for the weekend, counted by thirds (an out is a third)

6.  Base stealing is allowed. Baserunners must remain on the base until the ball reaches home plate before they steal.  Once a player reaches 3rd base, the ONLY way they can score is to be batted in or forced home on a bases loaded walk.  A player that steals 2nd can advance to 3rd on the same play, of course he is in jeopardy of being tagged out.  However, if there are runners on 1st and 3rd he can only advance to 2nd since the runner occupying 3rd cannot advance home until the ball is hit. The ball is always in play unless time has been called by an umpire.

All 8-U CP through 14-U teams that are based in GEORGIA, ALABAMA, NW FLORIDA PANHANDLE, SOUTH TENNESSEE (Chattanooga/Cleveland area) & MISSISSIPPI are required to play in FOUR total qualifying events which includes the 2020 Southeastern Championships or your particular State's "State Championship" event in order to participate in a Grand Slam World Series event.  15-U and up teams do not have to play in any qualifying events.    Teams from ALL other states can register on a FIRST COME BASIS as there are NO qualification procedures. Any team that does not fulfill the 4-total qualifier requirement must pay an additional $375 for each qualifier short of the 4-required events. 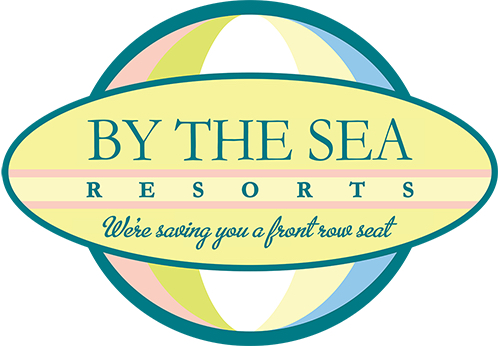 By the Sea Resorts 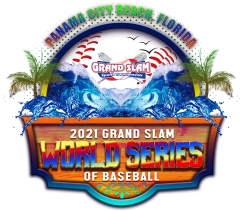 The 2021 Grand Slam World Series of Baseball Sessions I, II, III & IV will be held for the 16th STRAIGHT YEAR at beautiful Frank Brown Park in Panama City Beach, Florida, home of the World's Most Beautiful Beaches!